For fixing studs in threads. 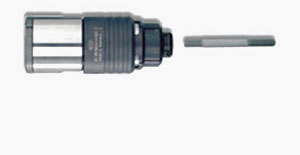 The Bilz SFC stud driver has been specifically designed to set studs quickly and safely to a required torque.

The process can be performed manually using pneumatic drivers, or automatically by means of a single or multi-spindle assembly machine.

The stud is inserted into the uniquely designed threaded jaws in the closed position and is screwed into the jaws until it makes contact with the stop pin.

The stud is then driven into the tapped hole in the workpiece until it reaches its pre-set length or required torque level. When the driver reaches either position, the threaded jaws are automatically opened, allowing the driver to be removed cleanly from the stud.

The driver may be removed from the stud, when the spindle is either rotating or stationary.